Here at Flim Springfield, we enjoy The Simpsons lots of different ways: from the classic cartoons and DVD commentary tracks, to collectible enamel pins, podcasts, and of course, live trivia shows. One of my favorite Simpsons supplements are the monthly comics published by BONGO, the comic company started by Matt Groening and friends 25 years ago.

Matt Groening got his start self-publishing his own comics, and over the years BONGO Comics has given new creators a chance to break into the industry. Breakout star Gail Simone (Secret Six, Wonder Woman, Leaving Megalopolis) wrote some of her earliest stories at BONGO, and couple years ago Coldplay frontman Chris Martin got the chance to publish his original non-Simpsons sci-fi miniseries “Mylo Xyloto” through the company.

Nina Matsumoto‘s story is one of the neatest we’ve heard: She’s a lifelong Simpsons fan whose 2007 manga-influenced take on the cast Simpsonzu, gained internet fame, which led to regular work with BONGO Comics, and eventually an Eisner award winning story in Treehouse of Horror issue 14! A combination of talent and knowledge of the show helped get her foot in the door and launch her career as a comics storyteller and designer.

FLIM Springfield: Who are you, and what are you doing in my house?… Tell us who you are, and what your creative work is about? If you like, what your life like aside from your work and Simpsons fandom?

Nina Matsumoto: I have a hard time sticking to one style or theme because I love so many different kinds of art, but I draw a lot of manga-inspired artwork, and am drawn to dark themes with bright colours. I mostly just stay at home but have been doing muay thai for over eight years to offset my largely non-active life. I have a huge interest in linguistics and have done professional Japanese-English translation work on the side.

FS: It happened at the beginning of that turbulent decade known as the 80s… When did you first watch The Simpsons? What early episode/joke do you remember?

NM: I can’t remember the first episode I saw (and never had a chance to see the early Ullman era shorts since I live in Canada–not that I would’ve been old enough to remember those). I may have started from the Christmas special because that’s my earliest memory of it, but it very well may have been a rerun.

FS: Gee, I never realized TV was such a dangerous influence… How has The Simpsons been an influence in your life / creativity?

NM: It definitely shaped my sense of humour above anything else, and since I mostly draw manga, whenever I try to draw in a cartoonier “western” style, you can see my Simpsons influence. My admiration of Matt Groening has also affected my handwriting, because I would copy his handwriting when I was younger (you can still see it today in the way I write capital Ns). 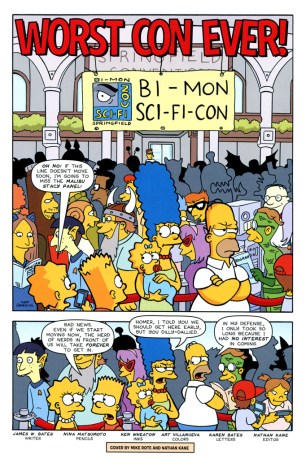 FS: You’ve talked about this online a bit before, but what was like to get that call from BONGO Comics? Was it your first pro work? (if not, what was it, tell us about it).

NM: The first call I got when “Simpsonzu” went viral was from a guy who worked in the merchandising department of Fox. He used to work as a layout artist on the show and he mentioned he might be able to find work for me. Though that didn’t lead to anything there, it was still a cool call to receive. The e-mail from Bongo kickstarted my career, as I’d never been published before up to that point, and I had practically given up hopes on ever becoming a professional artist. 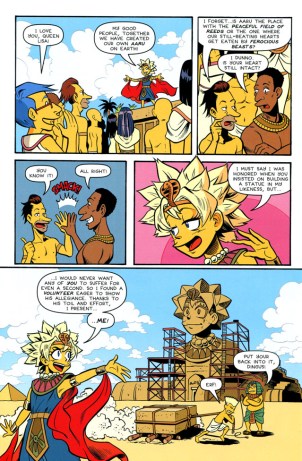 I’m grateful for then-art director (now editor) Nathan Kane for giving me a chance and trusting me with my first story (“Too Crazy Juvenile Prankster: Bartomu!”). It was the perfect job for me since it was a manga parody of the Simpsons. When he saw I could draw in the house style, he gave me more work on “regular” Bongo stories.

What’s funny is I grew up being constantly told by classmates that I should work for the show, which I’d brush off because I didn’t want to be an animator, but the possibility of working for the comics never once crossed my mind.

FS: $18 bucks for this? What a rip-off!… Do you or have you ever owned any Simpsons tchotchkes: Shirts, trading cards, DVDs, action figures, ‘hand-drawn animation cells guaranteed to increase in value’, etc… what’s your favorite stuff?

NM: I don’t collect a whole lot of merchandise, but I have a full set of Simpsons POGs. I still have around twenty VHS tapes filled with Simpsons episodes I taped off TV. Something like twenty years ago, I sent fan letters to a bunch of the voice cast, and in return I got a picture of the Simpsons signed by Dan Castellanetta and made out to me.

FS: What’s the neatest thing about the show/characters that you’ve learned from working on BONGO Comics?

Mostly just the little subtle things required to keep everyone on-model. But this knowledge is a blessing and a curse because now whenever I see Simpsons fan art, I notice the off-model parts, especially on tattoos.

FS: I saw you post on twitter a couple tattoos inspired by your Simpsons artwork, have you ever been asked to design a tattoo? 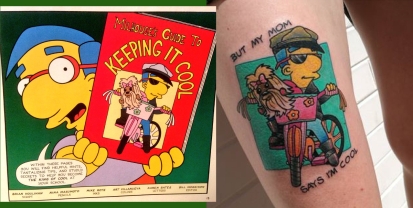 NM: I used to do tattoo commissions, but stopped when I realized the best way to get a good tattoo is find a tattoo artist you like, give them vague ideas of what you want, and let them come up with the design.

FS: Do you have a dream collaboration you’re hoping to do someday? An writer or another artist you want to do a project with that you haven’t yet, or a story you’re dying to tell? 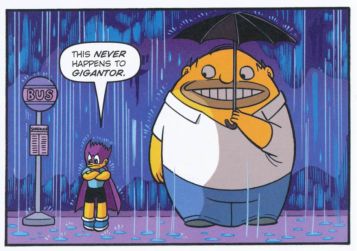 NM: I’ve done a few Simpsons manga parodies for Bongo now, and one of them was based on Death Note (“Murder He Wrote,” the one that won an Eisner in 2009). It was for their annual Treehouse of Horror issue, and I’d love to do another horror manga for it, this time based on the works of Junji Ito. Maybe based on “Uzumaki” or “The Enigma of Amigara Fault,” or just a general pastiche of his works. It would be a blast to mimic his beautiful but grotesque art style.

FS: You’re a very busy artist, what’s some of the next stuff you have coming out that you can tell us about? Any new Simpsons comics coming up in 2018?

NM: February 27th is the release date for “Sparks!”, a Scholastic children’s graphic novel I drew. It was written by my friend and frequent collaborator Ian Boothby, who’s arguably the most prolific Bongo Comics writer (he also did “Murder He Wrote”). Though we live in the same city, we met through Bongo Comics, and I’m happy we were able to work on such a major non-Bongo project together.

FS: Thanks to Nina for taking time out of her busy schedule to talk to us—seriously, creating comics is time-consuming hard work. You can learn more about Nina Matsumoto, and see/buy her work at: